Principle of Economics and Types of Market

Economics Principle of Economics and Definition: According to Adam Smith (1776), economics is an inquiry into the nature and causes... 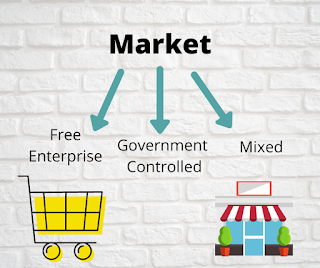 Principle of Economics and Definition:

Here, entrepreneurship comes in as the ability to put together land, labor, and capital.

We wish to have more resources as much as possible. Human wants, desires, and aspirations are limitless. However, we will have to decide on which we need among a bunch of others.

We run into this Problem of Making Choices because:

This deals with the working and performance of economy as a whole. The further division includes Public, International, Labor, Economic History, Comparative, Industrial Finance, Managerial Economics.

Before knowing about the market, we will have to grasp the concept of how the economy works.

Suppose there are two entities a. Household and b. Business firms;

They are the one who supply all the factors of production.

They receive the factors of production from the house-hold and convert them into goods.

They consume the good produced by the firms. Also they create more factors of production. This process then goes on and on.

Coming back to the types of market:

Here, the factors of production are privately owned by people. They have the legal right to posses them as well as auire them from others if needed.

This type of economy is also known as comand economy or socialist economy.

Every thing has a good side and a not so good side. However, mixed economy is supposed to carry the good side only of both the free enterprise economy and the socialist economy.

This economy is belives in the cohesion of Public and Private Sectors.

Most of the countries around the world follow mixed economics. With different contries there are different varients of this economy that they follow. It can majorly be divided into:

This is the type of economy where the private sector works more on basis of free market economy. However, the government is always there as an participating entity.

Examples: US, UK, Germany, France, Japan and others

Examples: Russia, China and others